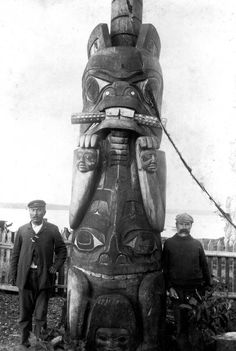 This pole once stood at the rear of the Monster House. The pole represented Chief Wiah’s crest of a standing beaver with potlatch rings and the crest of a sculpin prominently displayed on its abdomen.Harry Wiah, son of Chief Wiah, stands on the left. 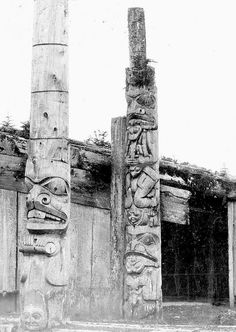 Memorial pole with the beaver holding a stick, and the right corner post. The fully carved corner posts were a feature unique to this house. Directly behind the corner post is a glimpse into the interior. Note the railing around the house pit. 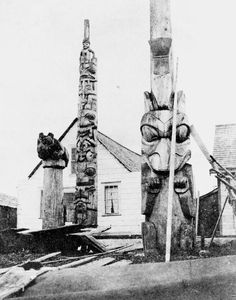 Property House with its frontal pole. The pole on the left with the horizontal bear on top is a mortuary pole, and the pole on the right is a memorial pole. Note the copper attached to the memorial pole above the head of the standing bear. 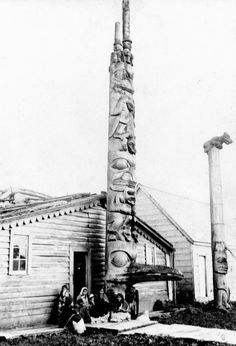 Star House with its frontal pole and memorial pole. Note that the frontal pole is not directly attached to the frame of the house. 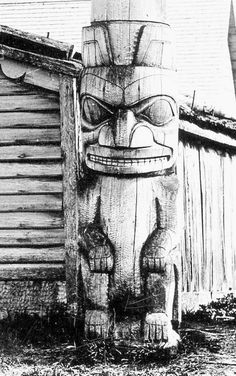 A memorial pole with a separately carved bear at the top of a stack of five cylinders, and at the base, a grizzly bear. 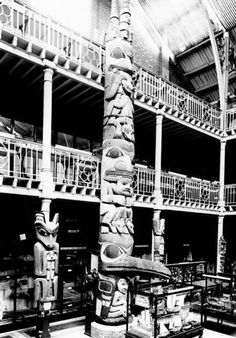 The Star House frontal pole after it was moved to the Pitt-Rivers Museum in Oxford University. 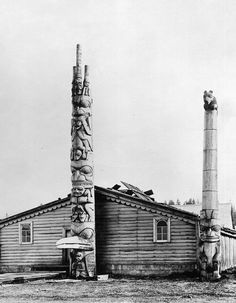 This house belonged to Chief Anetlas. The facade of Star House was altered to comply with Victorian taste in architecture including the use of milled siding, decorative trim, and arched windows. This pole now stands in the Pitt-Rivers Museum in Oxford University. 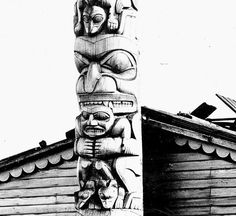 The Star House belonged to Chief Anetlas. This details the crest of a bear who is holding a human figure that is standing on two bear cubs. 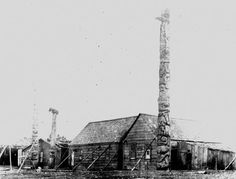 The Halibut House is shown here with it’s frontal pole before the pole was shipped to Jasper, BC. Notice the support posts angled along the side of the walls of the houses. In the background is the Star House. 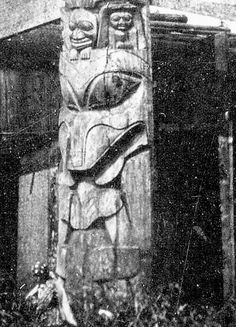 Detail of the base of the frontal pole showing a sea wolf eating a whale. Note the small figures in the ears and on the forehead of the sea wolf. 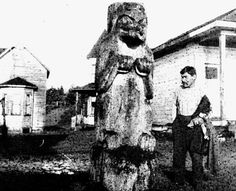 A standing bear memorial pole carved in more realistic style than on previous poles at Masset. Here the pole is shown after the top portion of the pole was cut off, just above the head of the bear. Standing next to the pole is Benjamin Bennett (son of Luke Bennett who raised this pole) - the last pole in Masset. 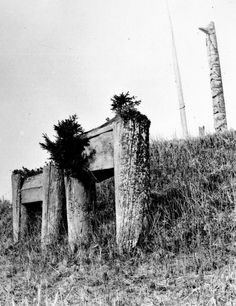 Double mortuaries with the frontal pole of the Bone House in the background at the top of the hill. 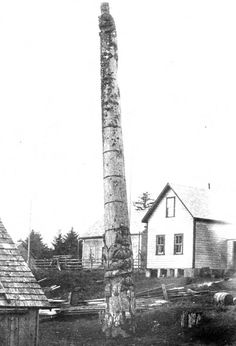 Crests on this memorial pole were a standing frog at the top, followed by potlatch cylinders, and a bear-like creature at the bottom. 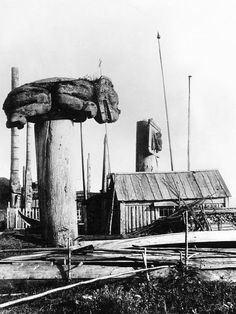 A memorial post consisting of a plain stout post about 3 metres high, surmounted by the large horizontal figure of a bear similar to, but much larger and more elaborately carved (including faces in the nostrils) than the bear in front of Property House. Like the former, this may have been a mortuary figure with a receptacle in the side to receive a box of ashes or a child’s coffin. 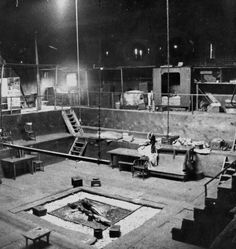 Interior of Chief Wiah's Monster House as it were when the house was still occupied.