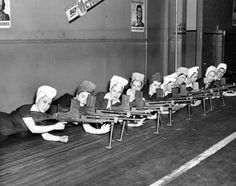 The women who manned the factories building guns for the soldiers demonstrate some of their product - Bren guns - for a photographer. 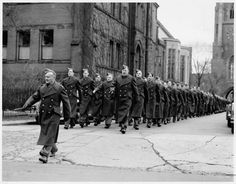 Conn Smythe leads his 30th Battery through the University of Toronto campus as he prepares for his second trip to war. Smythe, the legendary former owner of the Toronto Maple Leafs, fought with the famous Sportsmen Battery in WWI and, at age 45, formed the 30th Battery in Toronto. In this picture, they have marched through the famous Soldiers' Tower at the U of T. 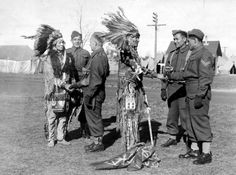 Two first nations chiefs pay a visit to Camp Niagara in 1940. Although most aboriginals were exempt from conscription through treaties, more than 3,000 enlisted 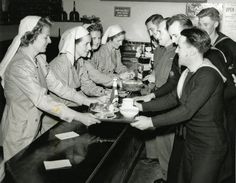 The active service canteen opened in September 1939 on Yonge near King St. in downtown Toronto. For six years, it catered to servicemen who were training in the city, offering dancing, singing and games. It was run by a citizens committee. 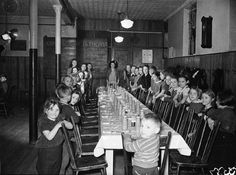 Daycare was not common until the war, when women began to fill up the jobs left by men going to war. Among the many centres that sprung up in Toronto was this one at the Salvation Army on Lisgar St. 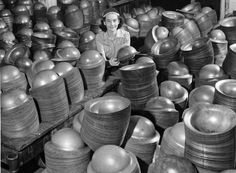 Canada had an insatiable appetite for the products being turned out by women workers in factories all across the nation. This woman inspected steel helmets. 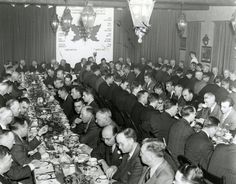 The Toronto Maple Leafs won two Stanley Cups during World War II, which managed to keep the locals satisfied. The team began losing some of their best players to the war effort after winning the Cup in 1942. With players like Teeder Kennedy and Frank McCool filling the void, the Leafs hoisted the Cup once again in 1945, prompting this dinner gathering saluting the team. Notice the distinct lack of females. 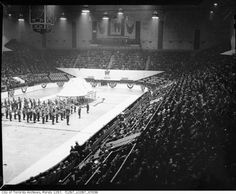 Maple Leaf Gardens was the site of many wartime rallies in support of Victory Bonds. These were variety shows that featured mock military exercises, bands and celebrities. One bond rally at the Gardens featured the Dionne quintuplets, another the U.S. radio stars Fibber McGee and Molly. 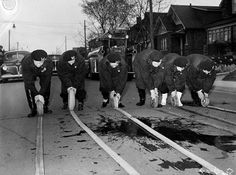 On top of everything else, even the firefighting in Toronto during World War II featured some all-women crews. These Swansea women were with Air Raid Protection and perhaps the only women's auxiliary fire fighting group in Canada. They trained every Wednesday night. 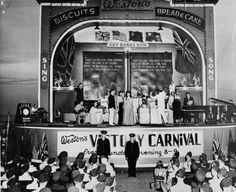 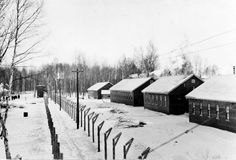 Double wire fencing features the camp-like atmosphere of the internment centre at Petawawa. As in World War I, the military base operated a prison camp for war prisoners. During WWII, 'Internment Camp No. 33' was home to 645 prisoners, most of them German. 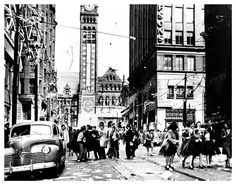 Bay Street was awash in people and paper as they celebrated Victory in Europe on May 8, 1945. That's old City Hall in the background, which remained a gathering point for many wartime events. 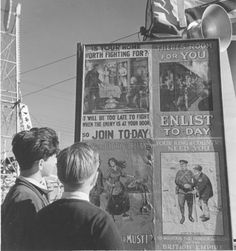 Enlistment posters went up everywhere in Toronto, including the Canadian National Exhibition. What's interesting about these particular posters that could be found in 1941 was that they were of World War I vintage. 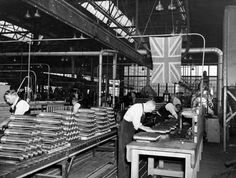 The Westinghouse plant in Hamilton was a centre for war munitions, supplying howitzer and shrapnel shells. During the war, 95 per of its operations were given over to military purposes. 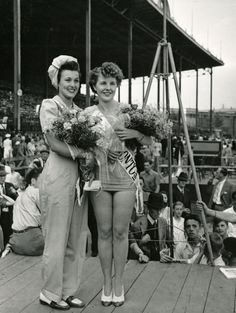 In this 1944 photo, Miss Toronto, 20-year-old Carolyn Ryan, poses with Miss War Worker, Dorothy Stone, 18, at CNE Stadium. Both women earned 300 dollar prizes. The War Worker pageant began in 1941 and was part of the Toronto Police field day activities. The original Miss Toronto pageant was held at Sunnyside Park in 1922. 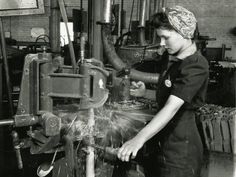 Women took on the traditional male roles at factories across the country, like this one in Toronto in April 1943. Women also found themselves in military service with more than 45,000 recruited to be mechanics or drivers.